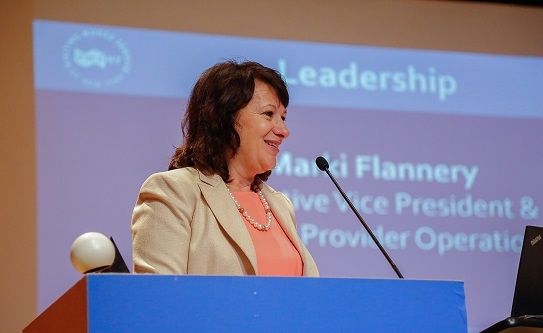 On January 31, 2021, after nearly four decades at the Visiting Nurse Service of New York (VNSNY), Marki Flannery stepped down as President and CEO.

During her three years as CEO, she oversaw one of the largest not-for-profit home- and community-based health care organizations in the U.S. On any given day, more than 40,000 New Yorkers are in the care of VNSNY.

In that time, Marki Flannery transformed this iconic organization by positioning it to succeed in an evolving health care landscape.

Under her leadership, VNSNY achieved financial sustainability and solidified its role as an industry leader by transforming the way it operated.

Supported by new senior leaders that Marki brought in, she oversaw the development of a new strategic plan and went on to ensure that VNSNY executed every aspect of that plan: establishing a new care management division that combines remote patient monitoring with targeted in-home interventions; modernizing VNSNY’s IT infrastructure; developing a world-class data analytics team; and so much more.

Through her leadership, VNSNY’s clinician training has been enhanced and expanded. Its hospice program has added specialized services for heart failure, COPD, and cancer patients. VNSNY’s large home health aide workforce has been empowered by new smartphone technology and training. Its famed Research Center has continued to explore new modes of care delivery and gather evidence of their effectiveness.

During her time as CEO, Marki Flannery established VNSNY as a national leader in addressing health disparities, bringing LGBTQ culture competency training to its entire workforce, creating an Anti-Racism Council, a highly rated veterans program, the continued expansion of VNSNY’s Community Mental Health Services, and the strengthening of funding and operations for VNSNY’s community benefit programs.

There is no doubt that Marki Flannery’s transformative role at the helm of the organization will have an impact within VNSNY and across the home care and hospice industry for many years to come.

However, perhaps the most striking and memorable aspect of her leadership occurred in the last year of her tenure when she oversaw VNSNY’s response to the COVID-19 pandemic—a response widely recognized as setting a standard for our industry.

Marki has always played a pivotal part of VNSNY’s well-known leadership in responding to crises during her 39-year tenure, from the HIV-AIDS crisis, to 9/11 and Superstorm Sandy.

As CEO, Marki played an extraordinary hands-on role, working tirelessly to address the needs of New York’s most vulnerable residents and ensure the safety of VNSNY staff, patients, and plan members.

She immediately set up an Emergency Response Team with leaders from across the organization; oversaw the design and dissemination of an internal COVID-19 dashboard; led the transition of thousands of employees to an effective remote-work environment; assembled an emergency personal protective equipment (PPE) procurement effort leveraging government and private sources; and more.

She accomplished all of this while keeping a keen watch on the overall quality of care provided to VNSNY’s patients, clients and plan members; the physical and emotional health of its staff; and the financial health of VNSNY.

While overseeing these many different activities, Marki Flannery also maintained a strong personal connection with the entire enterprise by providing direct encouragement and support through a variety of venues.

Beloved by staff and leadership alike, she kept direct lines of communication open and developed multiple avenues for employee interaction and support.

HCA’s highest honor, the Ruth F. Wilson Award, goes to an individual who has demonstrated exceptional dedication and made a significant contribution to home care over a period of time. With this award, HCA recognizes someone whose work has had a dramatic effect on home care, reaching beyond a single agency. This prestigious award recognizes an individual who has made our services stronger and more visible and who has never wavered from his or her support of home care.